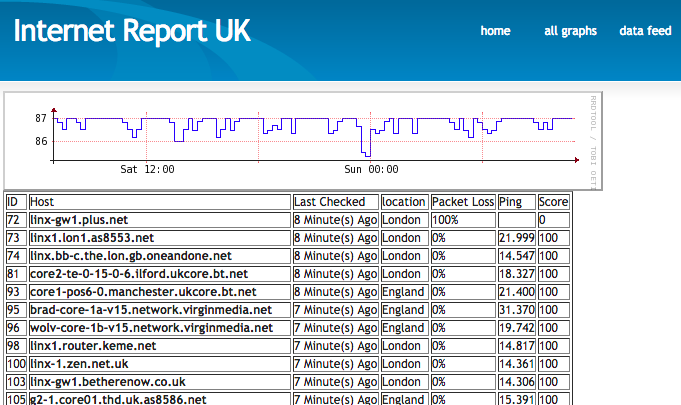 The UK Internet Report was a small project written on a weekend i had nothing to do. It was an attempt at learning RRD graphs and turned into a project i wanted to keep live and public.

Inspired by the InternetTrafficReport the UK internet report monitors key points in the UK network for ping times and packet loss and gives a score based on the 2. The higher the score the better the node is performing.

Over the years the site has seen spikes of traffic when network problems in the UK have happened such as the BT fault hits broadband.

Technical Details:
The site runs in 2 parts. The public facing site that people view is on a server located in the EU but the pings are sent from a colocated server in the UK. The helps to keep the ping times low and stable and stop them from being affected by peering. It also hides the server that the pings are completed from making it less affected when a large event happens by people trying to check the public facing site.

The backend system is all written in PHP and runs a script every 10 minutes checking IP addresses to check in a MySQL database and pinging them all for ping time and packet loss and updates a RRD graph. the data is then pushed to the to the public site for viewing.